The English Setter breed originated from the joining of the French & Spanish Pointer in the 1600‘s. The Water Spaniel and Springer Spaniel were added to the mix, to create one of the oldest gun dog breeds, and one of the first breeds to be recognized by the AKC.

The English Setter we know today were developed by 2 breeders, Edward Lavarack, who’s dogs became famous for their beauty and refinement. These dogs are generally used in the show ring, and referred to as “Bench” Setters. R Purcell Llewellyn produced a setter who was more proficient in the field, known today as the field bred English Setter

Setters get their name from their distinctive stance; a sort of crouch or “set” upon finding their quarry…once they catch the scent they go “on point”, not move until the hunter releases them.

The English setter is a gentle, friendly, placid dog that is especially good with children. He is mild-mannered and sensitive, and loves to both give and receive affection. He does not respond well when spoken to or handled in a harsh manner. He is more likely to do the opposite of what you demand of him, if handled this way.

These dogs are known to be alert and protective of their families and territories, but will calm down quickly when told to.

English setters are very sociable dogs. They enjoy being with both people and other dogs. They do not do well isolated.

They are very active as puppies, but are known to mellow out considerably when they fully mature.

Setters need plenty of physical and mental exercise, a tired Setter is a happy Setter! If not exercised enough they can revert to destructive behavior in the house and become difficult to manage.

English Setters can live with cats, birds, and other dogs especially if they are raised together. Introducing an adult Setter with a high prey drive can be a challenge, but usually one good swipe from the cat, and he’s good to go. Introductions to other dogs are not a problem if done correctly.

Setters at a Glance

The English Setter can be affected by a number of health problems, including:

In addition, all members of the breed are susceptible to certain cancers and skin diseases. Most of these ailments are genetic, and selecting an English Setter puppy carefully from reliable breeders (or another reliable source) will sharply minimize the risk for your dog.

The English Setter needs inspection at least once a week to check for matting behind the ears, or along any feathering he may have. Followed by a good brushing. This is a good time to check for ticks and possible fleas, as well.

You and Your English Setter will benefit from at least, the basic commands. The “Recall” is the most important command you can teach your dog, you could save his life someday by being able to call him to you immediately. The English Setter only wants to please you and is very receptive to positive reinforcement. Any other type of training method used, and you will have a disobedient dog. Setters are very sensitive, especially to any kind of harsh handling or harsh voice commands. They will stop wanting to please, if handled this way.

A tired Setter is a happy Setter! They do require active exercise, their age dictates as to how much. As a setter matures they can get by with less, as opposed to a puppy who needs time to expend all the pent up energy. He can be become destructive if not getting enough exercise 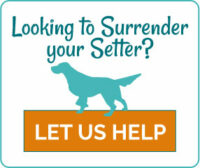 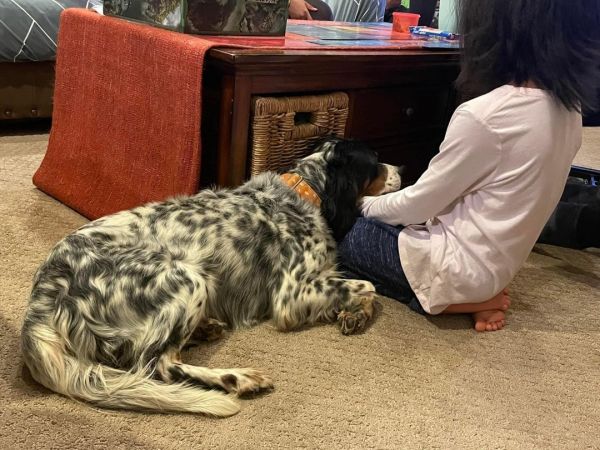